If you follow this blog, you came across a post I wrote about the Cereal Killer cafe, only a few months after it opened on Brick Lane in London. Sadly, the cafe was attacked and vandalised last Saturday evening, and I couldn’t stop myself to say a word. I wouldn’t suggest my original post was a raving review, but I loved the business idea (still do) and acknowledged the creative thought that was put into the menu and the design. 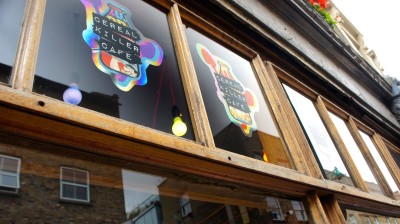 Admittedly the cafe enjoyed a somewhat controversial reception, was often deemed overpriced and hipster, also unavailable for people coming from a lower class. The situation quickly escalated, as the owners received hate mail through the letter box several times in the past few months. The business was often referenced as a symbol of East London gentrification. Unhappiness and discontentment finally culminated in a public protest. That all would be fine, if people participating in the protest didn’t turn into a rage fuelled mob throwing paint at the shop window and burning effigies out front, scaring unassuming customers inside, who had to be led downstairs to safety. 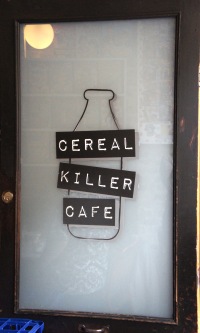 I have several issues with this story. Peaceful protest I understand. I’m all for raising our voices against injustice, standing up for our beliefs, and representing the truth we know and hold dear. Unfortunately that’s not what happened here. Some people seceded from the gatherers with a more malicious intent, carrying red paint and smoke bombs, burning sticks and hiding their faces; at that moment the mere idea of a peaceful protest failed and became a premeditated instigation.

But why attack an individual business that only recently opened, and is still trying to find its footing? Why is it, we never see gatherers chanting insults or throwing stones at multinational chain businesses who charge £4.00 for a coffee or £5.50 for a sandwich? Why make an example out of an independent business and its owners, who invest their life savings to try and make the business succeed? Are they the real enemy here? Their business (even if with the profit margin they make a killing selling cereal)  hardly has anything to do with gentrification, mighty conglomerates or real estate developers, who drive up the property prices to promote business, and vacate people from their homes. Cereal Killer is only one of the area’s many small businesses and pop-up shops that only attest to the ever-changing face of East End. In the past decades countless shops and eateries of various nationality opened and thrived in the neighbourhood, bringing undisputed and profitable diversity to an already diverse London. Where do we even draw the line between gentrification and diversification? 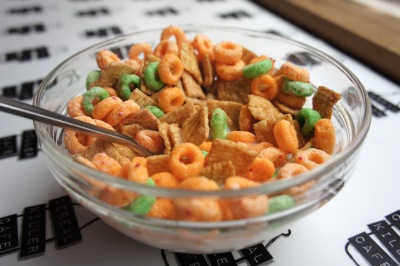 Is this attack really about gentrification?Or is that just a popular catch phrase to drive sympathisers on the streets and pick a fight? Does a hands-on approach mean that riot police have to be involved? And what was the desired outcome here? Scare the owners enough so they consider shutting the business down? Would that even change anything? Because an attack on a cafe run by bearded twins, selling cereal and pop-tarts hardly seems an effective tactic, it qualifies as a rather petty, short-sighted and not too intelligent move in the big scheme of things. Chanted words like “community” and “affordable social housing” become empty phrases deadened by the mindless vandalism, the legitimate claims are stifled by faceless, angry people lashing out at the first thing at hand. They sure are loud enough to attract attention, although that attention is now misdirected. And anyone watching the news will dismiss this incident as another example of endless civil unrest, and the valid arguments go unheard amidst the racist shouts and the thuds of thrown stones. Is this really what they want?

But what do you think? Share your opinion in the comments below.
More on the subject on The Guardian’s website (e.g. this article) all over social media.
For more pictures visit my gallery here.