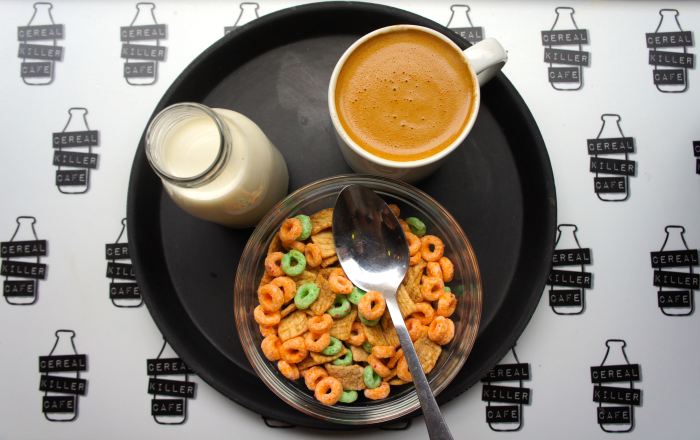 “Don’t have a cinnaiman” cocktail with cinnamon crunch, apple jacks and semi-skimmed milk

When it comes to restaurants/cafes I generally think there’s nothing new under the sun. Nowadays not a lot of new places make it in the still tough economical climate, and opening a new venue is almost always about the how, not the what. On the other hand I like being pleasently surprised. I like fresh, I like new, creative, sometimes even outrageous. Enter Cereal Killer Cafe in London. A place exclusively serving cereal. All kinds imaginable. When I first read about the opening, I was sold on the idea alone. An naturally my curiosity was peaked.

You mention cereal, my first thought usually is a horribly sweet, sugar-laden substance that has no nutritional value whatsoever and does more harm to your body than good. Always the cynic in me… Admittedly I’m not a huge fan of commercially available cereals, I much rather make my own, but let’s give the Cereal Killer Cafe the benefit of the doubt; assuming that wanting to cater to a larger audience, they have a big enough selection. Some healthy muesli-type thing maybe, or oat-based granola, I’d be okay with that. I have to consider my health after all… That said I don’t say no to a delicious snack based on principle alone. So off we go then, filled mostly with curiosity and anticipation, mixed with a healthy amount of skepticism.

Admittedly I had difficulty finding the place. First I walked past the narrow entrance right next to a larger corner shop. Their sign is unobtrusive and easy to miss. The cafe itself is small (although there is more seating downstairs) and stuffy, despite the staff’s desperate attempts to cool the room with several fans. Even with the airlessness (and probably adding to it), a long queue serpentines across the crowded room and chatter fills the air, testifying of the immense popularity of the place. The queueing is retrospectively not a bad thing; it gives you just enough time to inspect the massive selection of cereal (around a 120 different types), whose boxes fill up 2 of the 4 walls. You can even choose by region if you prefer, between US, UK and global favourites. If you can’t make up your mind, there are several cocktails dreamt up for you to select from. Once you managed that, picking a type of milk out of the 30 offered is not that difficult. Also toppings range from fresh fruit to coloured sugar pellets. Oh, Pop Tarts anyone, to round up your meal with? There are only 13 different flavours.

I don’t know why I was expecting something surprising. The Cereal Killer Cafe promises cereal and that’s exactly what it delivers. And wonderfully so. The charm of the cafe lies not only in their menu, but the interior as well. The nostalgia-filled atmosphere with memorabilia from the 80’s and 90’s (when cereal first became a thing) is going to take you right back to that time. Are you worried about sugar-overload? I guarantee you won’t be thinking about that when you’re trying to fish the last buoying piece of cereal out of the bowl, before slurping down the remaining ounce of sweet milk. Honestly, it made me feel like a kid again. Did I say oat-based granola? Sure, they have that too. But who cares, when you can have Unicorn Poop?!

Side-note: Unicorn Poop is one of the cocktails on the menu. Along with
Marshmellow Submarine and Fecking Nutcase. But what do you think of the idea?
Let me know by leaving a comment below.

All contents on this website were created by me and are for personal use only. Please respect my work, and the time and energy I put in maintaining this space.
Do not copy, publish, or use this content without my written permission. Excerpts and links may be used, provided that full credit is given to Postcards from the Country with appropriate direction to the original content.
For any queries don't hesitate to contact me. Thank you.
%d bloggers like this: