Budapest is my kind of town. Everything you want is available relatively easily. Because I don’t want to sound like Wikipedia, I was thinking long and hard what to wrote about. So here are some sights you shouldn’t miss when visiting Hungary, my top 5 favourite places in the city. Let me tell you, it was very hard to choose.

Vajdahunyad Castle – The Museum of Agriculture

Vajdahunyad Castle is a castle, or more accurately a building complex in City Park (Városliget), the main venue of the 1896 Millennial Expo. It was originally built in the same year to commemorate the millennium of the conquest of the Carpathian Basin (along with the Millennial Monument on Heroes’ Square, or the Fisherman’s Bastion on Castle Hill). The buildings back then were a little more than a temporary facade, constructed of wooden planks and cardboard, only to showcase Hungary’s history through architecture; but the complex was so popular that it was rebuilt by public demand. The buildings became permanent, and the display of several different architectural styles remained. Today it houses the biggest agricultural museum in Europe, but it’s worth visiting merely for its charm, and a picnic at the little adjacent lake. Enjoy feeding the ducks in the summer, or put on your ice skates in wintertime.

Gozsdu udvar (Gozsdu Courtyard) has always been one of my favourite areas in the city. I used to go to college in this district and loved walking through it every day even though it was a bit run down. It’s located in the 7th district (also called Elizabethtown), and used to be part of the old Jewish ghetto built here in 1944. Although it fell into disarray after World War II, it was declared part of the world heritage by UNESCO, and finally got renovated in 2009. If you were lucky enough to see it prior to the renovation, the change will blow your mind. It sure did mine. Today, Gozsdu udvar is one of the most dynamically improving hubs of the city centre; it offers excellent multicultural gastronomy (anything between a New York style gastropub, wine bars, and a hummus market), cultural programs, entertainment, and even a sky terrace, which provides a nice view over downtown Budapest. In the neighbourhood there are also several synagogues (Jewish triangle, including the world’s second largest synagogue), and quite a few restaurants that offer kosher food if you want to explore the Hungarian Jewish heritage a bit further. 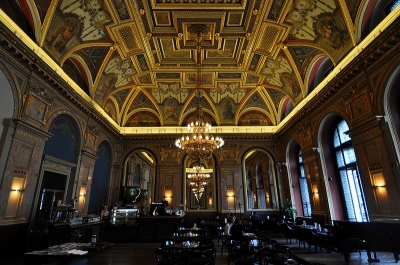 Another half-forgotten gem is the Lotz Hall in the Paris Department Store (Párizsi Nagy Áruház), commonly known today as the Alexandra Book Cafe. This glorious open-plan Neo-Renaissance building is located on Andrássy út (Andrássy Avenue), one of Budapest’s luxurious shopping streets; built in 1884, once housing a casino, a ballroom and 2 luxury apartments, it was and still is magnificent. After a fire almost completely consumed it, it was restored and became Hungary’s first modern department store. After surviving World War II, it was nationalised and became quite run down (like so many of its brethren); the neglect during the communist regime, the owner changes all took their toll before it was finally refurbished. Today it home to a bookstore and, hidden in the Lotz Hall on the first floor, a cafe. The interior design is art deco with original frescos, murals, and ornaments that have survived to this day (frescos by Károly Lotz, whose name the hall bears today). The majestic open space emanates character, elegance, and splendour. I love taking the escalator and letting the view engulf me as I slowly ascend. I highly recommend visiting in the afternoon, when a good cup of coffee and even better pastry is best enjoyed with live piano music.

The Statue of Liberty as seen from Castle Hill

The Citadel (Citadella) is located on the top of the Gellért Hill in Budapest, overlooking the Danube. (The hill was named after St. Gerard, a bishop, who according to legend, was killed by the local pagans in 1046. He was put in a barrel and rolled down the hill.) The citadel has a colourful history: it was  originally built as a fortress by the ruling Habsburg Austrians after the failed Hungarian revolution of 1848. Later it was occupied by soviet troops during yet another failed revolution in 1956 when the Hungarian people started a spontaneous uprising against the Soviet regime. Apart from the historical significance, I like this place mostly because it offers probably the best panoramic view of the city, including the overlook on Buda Castle, the Parliament building, Margaret island and 8 bridges across the Danube. The Statue of Liberty is also located here, at the end of the fortress plateau. Now the hill is a UNESCO world heritage site as part of “the Banks of the Danube”. One you’ve had enough of the gorgeous panorama, take the walk down the hill in the surrounding woods (believe it or not, it used to be covered with vineyards in the 18th century). At the bottom of the hill is the Gellért Thermal Baths, definitely worth a day trip on its own (day passes available).

Gresham Palota (Gresham Palace) is probably the most beautiful testament to Art Nouveau architecture. The building was named after Sir Thomas Gresham, the 16th-century English financier and founder of the Royal Exchange in London. Originally (built in 1906), the palace served as an office building and residence for the senior staff of the London-based Gresham Life Assurance Company. During the Soviet occupation after World War II, Soviet soldiers used it as barracks. A few years of neglect eventually turned the building derelict. When the building was nationalised, the spacious apartments, once witnesses of sublime aristocratic chic, were divided into small flats. After the end of the communist regime (1990), several companies started negotiations about turning the place into a hotel. Finally, Four Seasons signed a development agreement to restore the building to its former glory. And, oh my, they did a very good job! Today this is one of Budapest’s most luxurious hotels (probably serving the most expensive coffee in town), but the reason I recommend popping in, is the restored original details, like the stained glass, the large main staircase, and the winter gardens. If you like Art Nouveau, I guarantee you’ll love this.

Oh, was that five already? Well… next time I will try and prove that Hungary is
not all about Budapest.I’ll take you out of town to absorb a little country charm.
In the meantime, enjoy the gallery here.